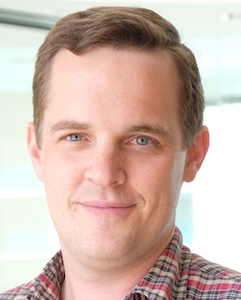 Jeremy has been with the Vertebrate Genomics group for over 10 years. After leaving an unsatisfying position at a pharmaceutical company, he was excited at the open and cutting edge nature of work done the Broad Institute. He started off working solely on the improvement of the dog genome assembly, but quickly grew into a broader role as Project Coordinator for the group. He has worked on every vertebrate genome project since, including the horse, anolis, coelacanth and stickleback projects.

He is responsible for much of the Vertebrate Genomics group’s communications, both internally at the Broad and with external collaborators, and is tasked with both finding out about new technologies and helping to apply them to the work of the Vertebrate Genomics group.
When he’s not at the Broad, he’s still a huge nerd, including the study of evolution, but also heavily into science fiction, fantasy, comic books movies and video games, the love of which he is trying with varying degrees of success to impart upon his two young children, much to his tolerant wife’s chagrin. He’s also a deeply obsessed with American politics (he will tell you “It’s my sports.”)