This week, we published a study where we identify genetic variants that are associated with human obsessive-compulsive disorder (OCD). We used a new approach that combined information from studies in dogs and mice, as well as studies of autism in people (people with autism often show compulsive behaviors). Although we are still far from fully understanding the underlying causes and mechanisms of OCD, our study finds four genes where genetic mutations were more common in people suffering from OCD. Investigating the function of these genes tells us about the neurobiology of OCD, and may one day lead to new therapeutic targets.

(You can also read the Broad Institute News story) 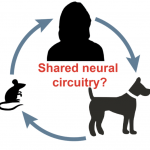 Here, I would like to share the backstory of our paper, to illustrate how we ended up utilizing dog genetics to guide human psychiatric research.

As you may have seen in our previous blog posts, dogs are a great model for the study of behavior. They have evolved alongside us for thousands of years, helping us on various tasks like herding and hunting. Intriguingly, some dogs have behavioral disorders that share similarities with human psychiatric disorders, suggesting that research on those dog behavioral disorders might help to uncover the genetic basis of human psychiatric disorders.

Many people have suggested that canine compulsive disorder (known as CCD) might be a natural model for human OCD. A natural model is an animal that exhibits a disease while living in their natural environment, and not as the result of human manipulation.  Both dogs with CCD and people with OCD exhibit time-consuming, harmful repetitive behaviors, and both have partial improvements when treated with Prozac and other selective serotonin reuptake inhibitors.

In 2010, we identified a region in the dog genome that is strongly associated with CCD (specifically, compulsive flank sucking or blanket sucking), by analyzing only 160 Doberman Pinschers. I say ‘only’ 160 dogs, because if we used the same method to study human OCD, we would have needed to analyze tens of thousands of human genomes – something no single study in psychiatric diseases had achieved at that time. Even today, such a large sample set has been achieved for only a few psychiatric diseases, and not for OCD.

We followed up on that surprisingly successful study by looking at more dog breeds. In addition to Dobermans, we included German Shepherds, Shetland Sheepdogs, and Jack Russell Terriers.  We found four genes that are influenced by genetic variants present only in dogs with CCD. None of the genes had been connected to OCD, but three (CDH2, CTNNA2, ATXN1) were known to be involved in human brain function. This  suggested we were on the right track; studying CCD in dogs could also help us find genetic risk factors for OCD in humans. 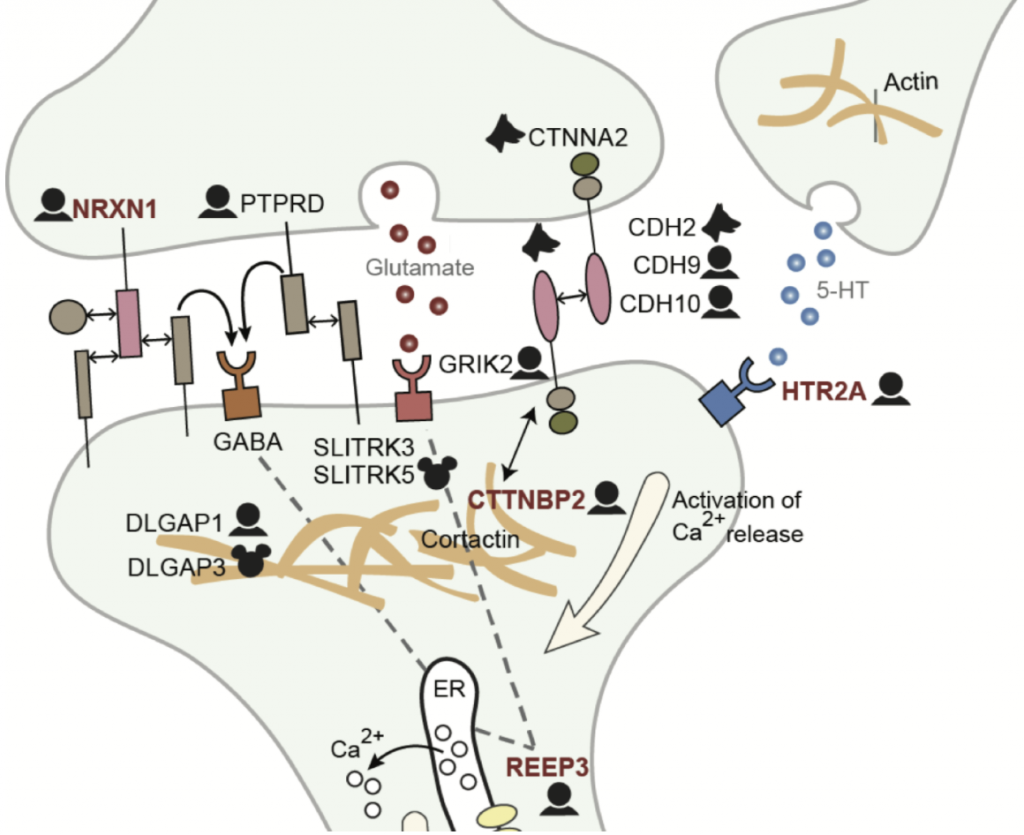 Up until this point, though, we had only studied dogs. In our new paper, we wanted to see whether what we learned from dogs might translate over to human. The answer ended up being a little complicated. Although we didn’t find exactly the same genes, we found genes that act in the same pathways. It’s almost like each species we study gives us just a few pieces of the puzzle, but by putting them together, we start to see the whole picture.

In our new paper, we designed a genetic study of human OCD that interrogates 608 genes (about 1 out of every 30 genes) in OCD patients and healthy individuals. We selected the 608 genes based on our dog studies, as well as previous studies in mice and humans. We found four strongly associated genes: NRXN1, HTR2A, CTTNBP2, and REEP3. The most strongly associated gene, NRXN1, is also linked to autism, another disease with a repetitive behavioral component, like OCD. Interestingly, both NRXN1 (OCD-associated gene) and CDH2 (CCD-associated gene), encode proteins which hold the synaptic structure in the brain. Furthermore, the genes we found in our dog studies were also more strongly associated with human OCD, suggesting (although not conclusively showing) that people with OCD may be more likely to have changes in these genes too.

This is only the beginning of this research. OCD and CCD are both complex diseases, and we think many, many more genes are probably involved, as well as environmental factors. We’re not even sure yet how genetically similar OCD and CCD are. To scale-up our approach, we are currently pursuing two parallel research efforts. First, through our Darwin’s Dogs research project, we are collecting dog DNA samples and detailed dog behavioral information from thousands of dogs, and this includes information on compulsive behavior. Second, we are part of the Nordic OCD & Related Disorders Consortium (NORDiC), which aims to collect the world’s largest richly phenotyped and genotyped sample of OCD cases from Nordic countries. By harnessing the power of two different species, we hope this research will one day lead to new and better therapies for both humans and our canine friends.