Domestication and the critical period of socialization

When people see photos of these little balls of fuzz, their immediate response is “Oh, I want one!”. No you don’t! Wolves make terrible pets. No matter how you raise them, they are not dogs. They destroy things. They often harm themselves, other animals in the home and the people around them when kept in a home. They are usually best described by people who’ve made the mistake of having one as a pet as “a disaster.”

Wolves are not dogs, and my research is focused on figuring out why. 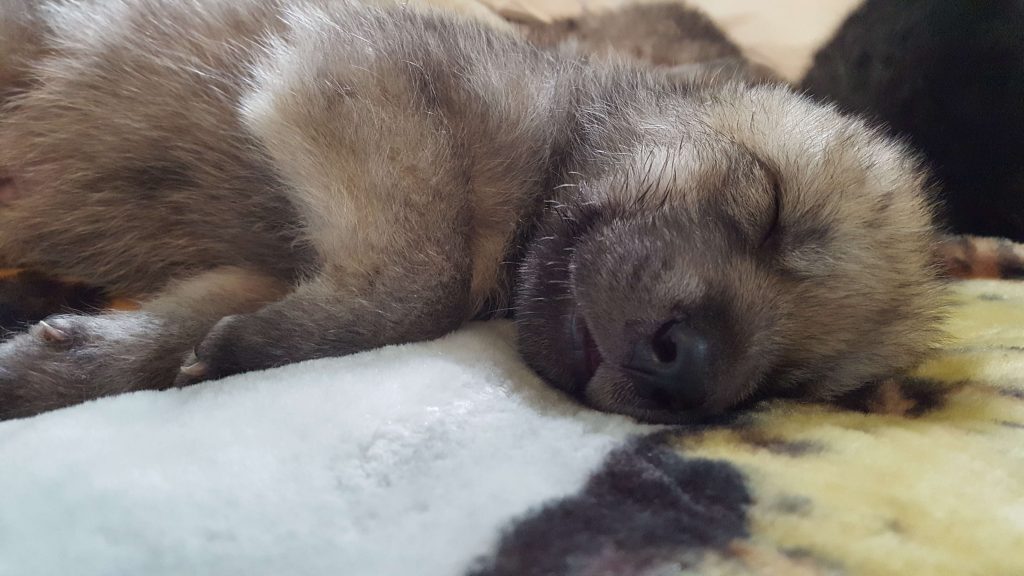 A word about socialization and domestication. Socialization is the process by which animals develop social bonds during their lifetime, as they interact with others. Domestication, on the other hand, is an evolutionary process that involves changes in DNA and takes many, many generations. As a result of these genetic changes, the young of domesticated species, in contrast to their wild ancestors, are very easy to socialize with other species. Dog puppies learn, with little to no effort on our parts, to behave in a social manner with people, just by being around us.

Though wolves have not been domesticated, they can also be socialized to people, but it is much, much harder. In order to be socialized, they must be in nearly constant contact with people starting before they are three weeks old, and continuing until they are at least 4 months old. Even after all that, they still need daily human contact throughout their lives to maintain this socialization. And, after all that, a socialized wolf is still not the same as a dog.

I learned first hand how different wolves are from dogs about thirteen years ago when I raised my first litter of wolf pups. One morning, I was confronted with a fierce bundle of fur. The tiniest pup, Luna, had found a small towel smelly with fish oil and she was guarding it ferociously. I knew I couldn’t just take her prize away from her. When I raise wolf pups, I’m very careful to make sure they connect me with good things, and taking a prized object from her could have damaged our new relationship. So instead, I traded. I grabbed the first thing I could find that I thought Luna would value above a stinky washcloth. I brought back a tin of sardines. First I threw a tiny piece of fish her way, but she flinched, growled, bared down harder on the towel and backed herself into a crate. In desperation, I showed her the entire tin of fish. Luna froze, looked at me out of the corner of her eye, dropped the towel and snapped at the sardines. I reflexively pulled my hand away and saw that she had taken the middles out of all of the fish! I grabbed the towel and shut the crate and left her to finish her prize. By the time I returned she was happy as ever to see me. 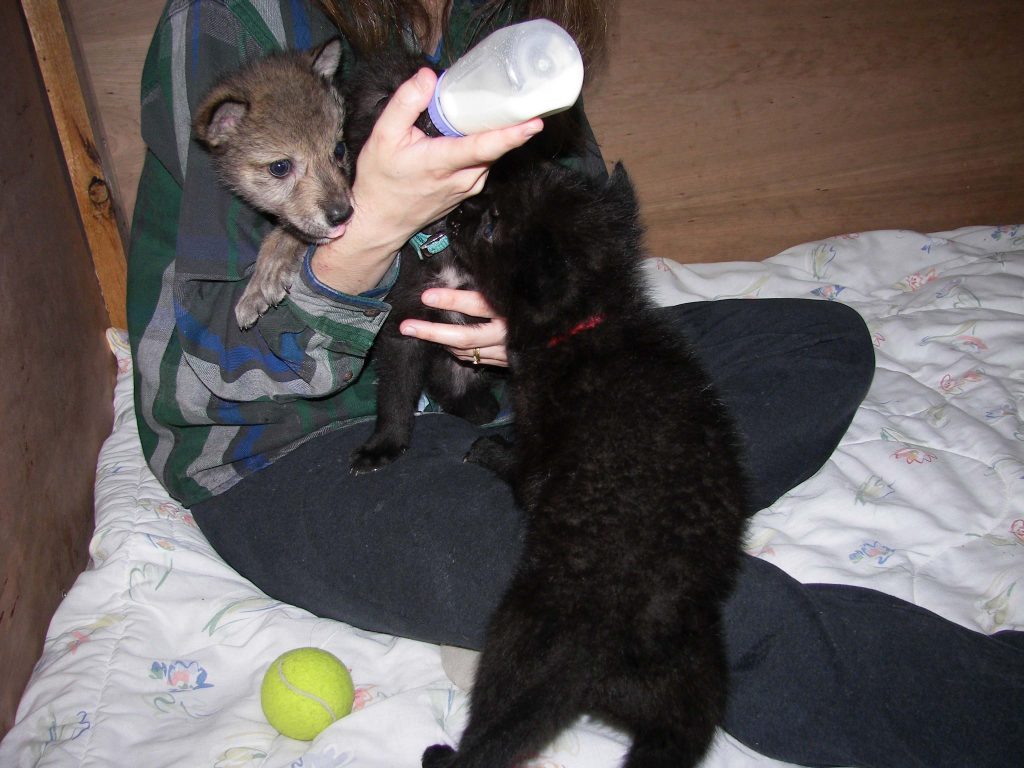 This ferocious wolf puppy was just 4 weeks old. Four-week old dog puppies have just barely started walking. Luna, at the same age, was far more agile than a dog puppy would ever be. This curious difference between dogs and wolves has been a major focus of my work ever since.

By studying wolf puppies and dog puppies, I confirmed that wolves start walking and exploring at two weeks of age. In dogs, this is delayed until they are four weeks old. It turns out that this ability to actively explore marks the start of what we call the “primary critical period of socialization”. Dogs and wolves explore readily at the beginning of this period and are completely unencumbered by fear of new things. Fear gradually increases during this period until, about four weeks later, they will no longer approach new things. This is an incredibly important time in the life of a young animal because this is when they develop social bonds with other animals. While this is usually with other members of their own species, they will also bond with people, if we are around.

This difference in timing, from 2 weeks old in wolves to 4 weeks old in dogs, doesn’t seem like it would be a big deal. After all, the critical period of socialization still lasts for 4 weeks in both wolves and dogs. In fact, it dramatically changes the early experience of dogs and wolves.

This is something I also first noticed in Luna and her siblings. I usually play music in the background when I am raising dog pups. When their ears open, at about three weeks old, it helps them get used to different sounds with the absence of any fear. When I did the same thing with Luna and her siblings, they were terrified! It was exactly the same thing with the sound of my voice. What was their response so completely different?

It turns out that, while dogs and wolves start hearing at the same age, wolves at that age have already entered that “primary critical period of socialization”. They have already started to explore the world, and begun to develop fear of new things. When those three week old wolf pups first heard me speak, it was a brand new sound, and it was extremely scary to them. Once I breathed on their faces, though, and they smelled me, they recovered quickly. They knew my smell, and could attach the familiar smell of me with the new sound of me. We could continue the process of socialization without being inhibited by fear. 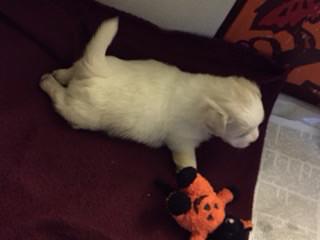 This small shift in timing could be one of the most important differences between wolves and domesticated dogs. Dog puppies can smell, hear and see before they start their critical period of socialization. That makes it much easier for dogs to form social bonds with people. Any time spent with people between 4 and 8 weeks provides a complete sensory experience. For wolves, this diverse sensory information is provided slowly over time and inhibited by fear. Because they start the critical period of socialization when they are still blind and deaf, they rely mostly on their sense of smell to determine what is familiar and what is novel. While they can be socialized to particular people, they have a hard time generalizing this socialization to all people. Luna and her siblings were socialized primarily by myself and another woman, and we tried to have many different kinds of people visit them. Still, when they met their new caretaker, a tall bald man who was pretty much the physical opposite of me, they found him very alarming. 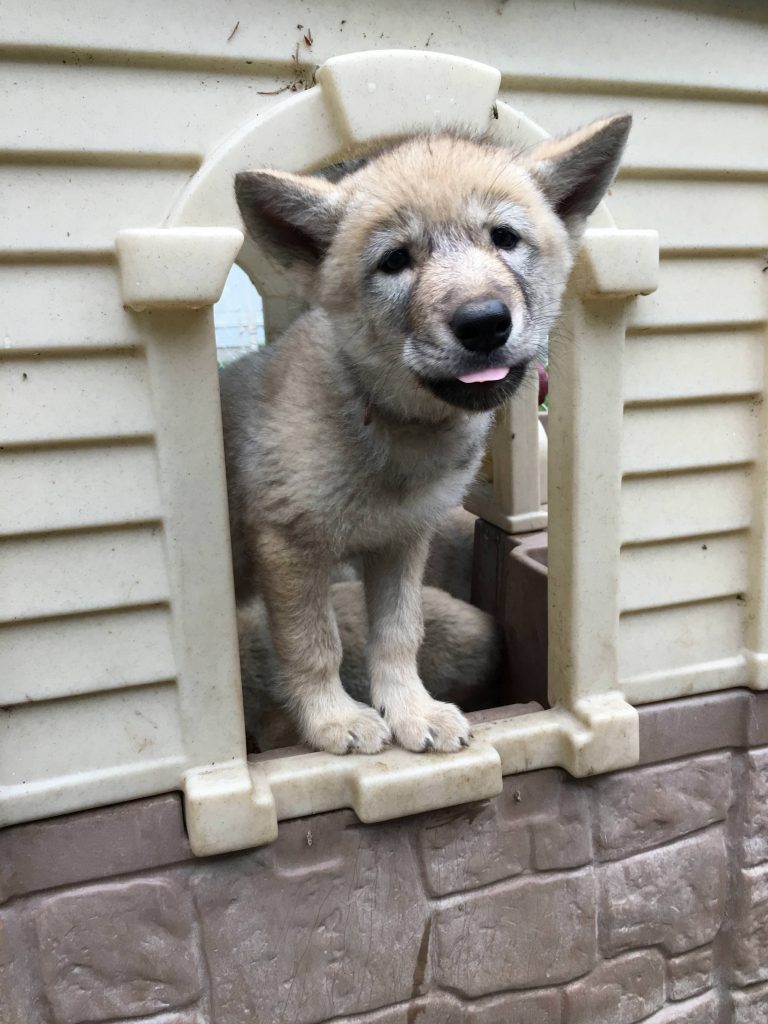 We’re just starting to really figure out why wolves are so different than dogs, but we certainly understand that they are! Despite all of your hard work socializing a wolf puppy, it’s still far more fearful of new things than a dog, and will always be “wolfy” in other ways: more inquisitive, more “street smart,” more destructive, and more dangerous to other members of the household, including pets, children or even adults with whom they are socialized, than a dog. So next time you see a picture of a wolf puppy, appreciate how adorable is it, and then go thank your dog for being such a friendly, easy companion!